Making a note for this amazing soundtrack music for any kind of enchanted adventuring actvities.

And another great synthwave game OST, like they’re flocking.

This is the best piece of retro futuristic synthwave record I heard in a while. I haven’t played the game yet, but definitely makes me want to. 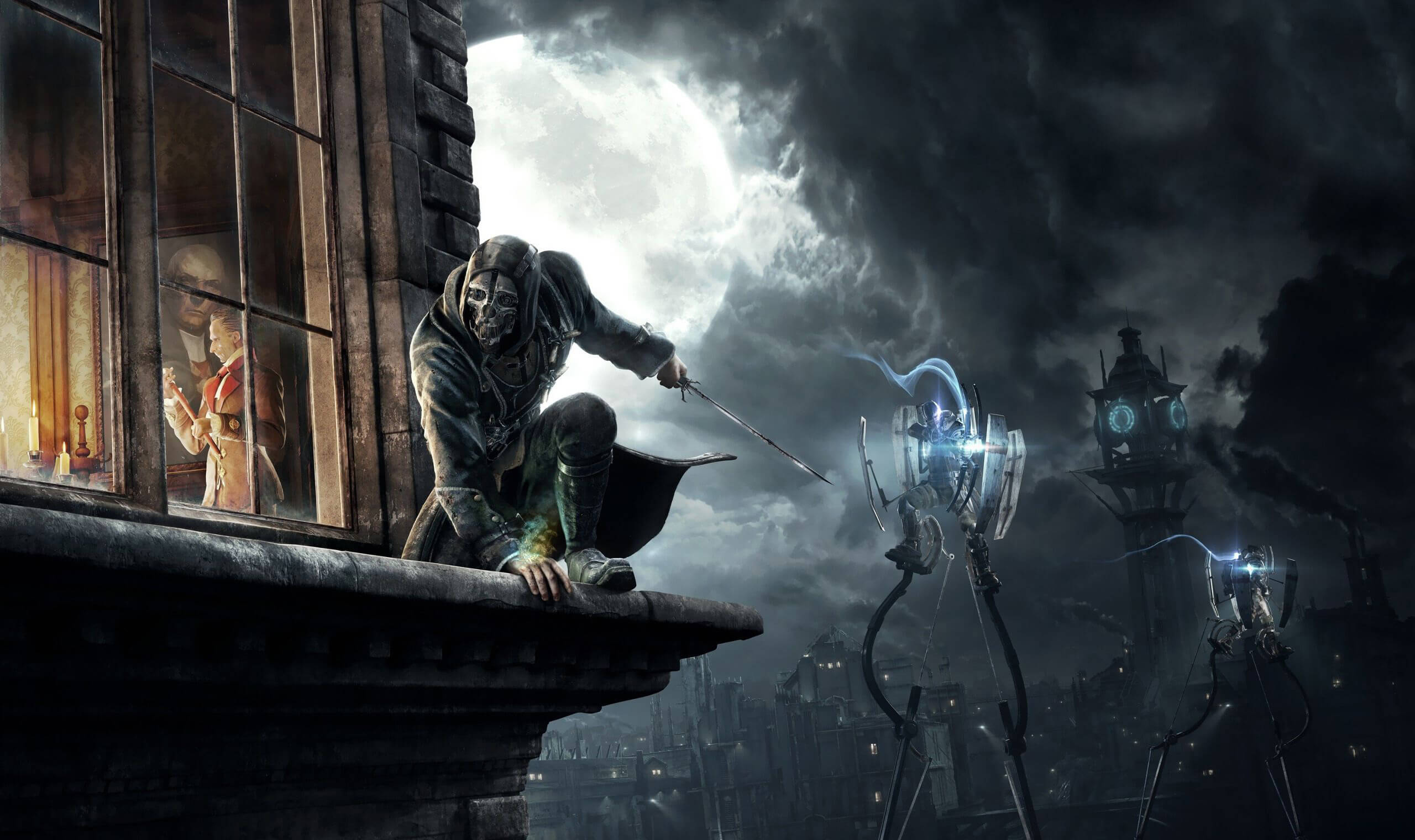 I loved getting lost in the gloomy and bizarre art of this game. A dark trip in the intersection of steampunk and gothic. The main story is supposedly playable in 12 hours, so I guess I stuck around a bit more with my 30 on the clock. I ended up doing the completionist track, but often I found myself doing just long and lingering looks around, pausing in the gameplay and making note of many details of this beautfully grim world.

There is all this fuss going on about the new Diablo title that Blizzard announced and which is going to be a mobile game. I have mixed feelings about that but that’s not why I opened this post now. I was listening to Rhykker’s reaction video to the story and I found a comment underneath that hits really close to how I feel about games as a medium for years now.

“It is clear to me that the last line of defense against this orwellian nightmare is the gaming industry as the rest of the industry has gone bye bye in terms of neutrality and meaningful content, im referring to the media, hollywood and tv.
Theyve tried endlessly to destroy the gaming community but we have been resilient and stoic amidst this onslaught of social-political venom which only strives to dumb down stories which would otherwise have meaning in people’s lives hence making them free and imaginative thinkers.”

So, along the same lines: I think there are so many overwhelmingly satisfying narratives in video games that no other medium can come even close to. Maybe books. But games still have the potential to be visually pleasing too, and the interactive nature of the medium is another wonderful aspect.

The best thing you can hope for in movies nowadays is that Netflix picks a project up, believes in a team enough not to over-control them, and just maybe they don’t fuck it up. And even then stories are easily sterilized, censored or at least watered down to cater for a larger audience and meet a certain age restriction badge. And it is so disappointing. Going to the cinema to watch my favorite IP’s new instalment or a new and promising flick and end up with something subpar – in the past years this happened to me way more times than not.

In games even the biggest blockbusters can bring such jaw-dropping stories with so much less compromise. Take the Witcher 3 for example. There are so many notable elements in that world from interesting through magically enthralling to crazy-ass horror, but they could pull that off in an AAA quality fashion with quite some investment and still make a shitload of money on it. They didn’t need to remove any weird characters, sick visuals, or flashing boobs to meet an age group. They just put together what felt right and what could tell one of the best interactive stories in the past decade, and it sold. Because it feels right. Because this is what a great product looks like. And because people are not complete idiots and they like when something is right. (At least that’s what I hope.)

Probably there could be many thoughts to be added here to come to some clever conclusion. We could look at all the social dynamics going on in the world, and how economics are shaping up, and what practices are working in terms of sales and marketing, or how the corporate world works when such huge money is at stake. But I don’t want to make some clever point as a conclusion. I just want to express that I am so disappointed in how the “story industry” works these days. And whatever explanations may be wrapped around all this, it is unfathomable for me why most of the industry is only capable of producing mediocre shit while the actually good stuff clearly sell great, too. This is probably some kind of money politics that are beyond my comprehension. But it doesn’t make the whole situation less of a let-down.

Ah, I am reminding myself to the title of this post, so just before I end it on a fully depressed low: most of the movies are shit, but on the bright side there are brilliant games and they just keep coming. So fuck it Hollywood, we are fine on Steam and GOG.

This game had very nice artwork with great atmospheric music and just enough action-puzzle platformer gameplay. I wouldn’t go for all the extra material and achievement hunting but the 10 hours was well worth the playthrough. One thing bonus was the ending: I totally didn’t see this beautiful piece of art coming at the conclusion of the story. That I would replay a few times just to look at it.

Feeling psyched for a bunch of stuff. It is completely insane what is achiveable realtime in-game. Below are some notes in order of the volume of cheers.

Cyberpunk 2077 is a waiting for ages that I don’t mind. I so don’t want to rush this. Although I am quite surprised of this first trailer, it is much more cartoonish than I expected. On the one hand that’s an interesting take and turn that I may not mind. On the other hand I was expecting something more dark and sharp. Anyhow I think this will change quite a bit until its release so we shall see, long way to go.

Ghost of Tsushima seems like the Witcher 3 in Japan. Everything said. (I clocked 175 hours in the Witcher 3, not a second I regret.)

Beyond Good & Evil was one of the most important gaming
impressions of my younger years, it carved some memories and moods into
my mind. Seeing this getting a sequel and in this quality and change in
tone, well, that’s something that leaves words stuck in my throat. I just hope it makes such an impression on the current generation as it did on me back then.

Anthem still cannot make a mistake, it gives me goosebumps with everything it throws at me. The whole universe and all its features make me excited.

Starfield has this oldschool sci-fi tone to it, which triggers a shut-up-and-take-my-money on me. Somewhere in the corner of my mind also brings up memory of Interstellar Marines, which had the same effect but failed so miserably. Although not a real comparison, IM was an indie endevaour so… Anyway, looking forward to what this will actually be about.

Dying Light was the strongest atmosphere in a game after Witcher 3 in the past years that I kept going back for. Seeing such a generative world building aspect to it in Dying Light 2 just blows my mind, can’t wait.

Rage 2 is the latest DOOM with a Mad Max skin on it. I don’t think it’s much more than that but that is just enough to make this list of mine.

Last of Us 2′s stealth moving around schools even the latest Tomb Raider by a ton of miles. It is absolutely amazing, like watching a movie.

And lastly: DOOM Eternal. That latest DOOM was a smash in the stomach. Once I upgraded my rig for the latest games’ ultra graphics level this was my first test field – and it just smashed. Such brutal speed and action that you can only get from a DOOM game. I am a bit wondering though if they can pull this off two times in a row. We shall see.

First I was pissed that after one night of playing I got through to the half of the game, so it was going to be a 10 hour ride tops. And didn’t like the fact that it was basically a rail shooter with cutscenes and shootouts following directly one another.

Then in the second playing session it just clicked: the story got grimmer by the minute, the events went gruesome, Max Payne turned into a killing machine as in John McClane meets John Wick but way darker and with booze and pain killers, and I felt the rage of Doom but with the inherent feeling of the nothing-left-to-loose death wish. And then, getting close to the finale when I had to shoot my way through an airport terminal while Health’s Tears was thumping overwhelmingly in my ears, that moment made this game finally unforgettable.

Totally didn’t expect Max Payne 3 to be anything close to the first or even the second, and it wasn’t, it was a completely different setting but the mood, they nailed it again. Oh, and the writing, quotable quotes all over, Max Payne is a poet.

END_OF_DOCUMENT_TOKEN_TO_BE_REPLACED

It is an atmospheric horror game currently on Kickstarter. It is a piece of art. You should support it.

I’ve just finished the video game Brütal Legend finally after many takes through many years but this time I took it to the end; although it was not that big deal in terms of time (or difficulty for that matter) even though I am quite a completionist.

So. This is easily one of my most rewarding and awesome gameplay experiences ever. And reminds me again how rich the lore of heavy metal is. Nothing compares. Really. Nowadays I tend to listen to more electronic music than metal but still, the world around heavy metal with all its characters, icons, legends, elements and stories, let it be imaginary or based on the real world – you just cannot beat it. And Brütal Legend brought all this to life in the most beautiful way possible. I loved to be sucked into that world.

Thank you Tim Schafer, thank you Double Fine, thank you Jack Black. And my heart went boom listening to the voices of Lemmy Kilmister, Rob Halford, Ozzy Osbourne and Lita Ford. I may easily go back to do some achievements just to meet the Guardian of Metal and the Kill Master again.